BioDiem’s lead asset is the Live Attenuated Influenza Virus (LAIV) vaccine technology. Our LAIV vaccine licensing business involves out-licensing of the company’s platform technology to vaccine manufacturers for the production of intranasal vaccines for the prevention of seasonal and pandemic influenza.

BioDiem has exclusive rights to commercialise the LAIV technology outside Russia and the Commonwealth of Independent States.

We currently have two commercial partners, in China and India, and our LAIV vaccine technology is also licensed to the World Health Organization (WHO) as part of the Global Pandemic Influenza Action Plan to Increase Vaccine Supply.

Our LAIV technology was developed at the prestigious Institute for Experimental Medicine (IEM), St Petersburg, Russia. In Russia the LAIV intranasal influenza vaccine has been approved and used for over fifty years in millions of people – children, adults and the elderly. BioDiem in-licensed the technology, and maintains a close and strong relationship with the IEM.

How does the LAIV influenza vaccine work?

The LAIV vaccine is administered by nasal spray and induces a rapid immune response in the lining of the nose and pharynx. The vaccines are based on Master Donor Strains that have been rendered ‘cold adapted’ and temperature sensitive, so that they will not replicate readily at temperatures above 33°C (as found in the lungs). The administration of the vaccine stimulates a broad mucosal, cellular and humoral immune response (all of which are required to optimise the effective prevention of influenza), without causing the disease.

Unlike the more traditional influenza vaccines which are injected, the LAIV vaccine is given as a nasal spray.

Each year the strains of influenza circulating in the population change. The diagram shows how the LAIV vaccine is adjusted so that it is effective against the relevant strains (wild type), as recommended by the World Health Organization each year. 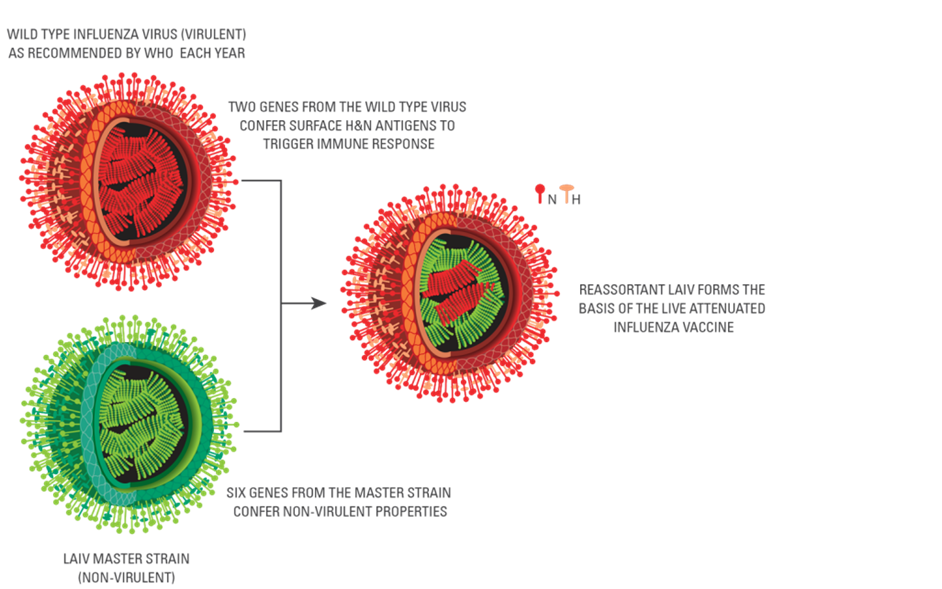 The Live Attenuated Influenza Virus vaccine has a number of advantages. Extensive clinical trials and over fifty years of use in Russia have established the safety and efficacy profile. The LAIV vaccine is suitable for rapid production via cell-based manufacture giving a high yield and can also be manufactured using eggs with an increased yield compared to other influenza vaccine technologies. First-in-human and proof- of-concept clinical trials have been completed in Europe for an LAIV vaccine manufactured using a mammalian cell-based method.

One major advantage of the LAIV vaccine over the standard influenza vaccine is that it is a nasal spray so does not require injections or trained personnel. This makes it easier to use and administer. It also appears that vaccination using the LAIV offers immunological advantages in that it produces immunity similar to natural infection thus creating a broader immune response involving mucosal, humoral and cellular immunity.

It has been shown in many studies that the LAIV vaccine provides better herd immunity than inactivated vaccines. Herd immunity is where non-vaccinated people are protected because of the larger ‘herd’ of vaccinated people. In the Novgorod school study, it was observed that influenza morbidity was significantly lower among non-vaccinated pupils and staff, where more than 50% pupils were vaccinated, compared with those schools where pupils received inactivated influenza vaccine. [Rudenko LG, et al., (1993) Efficacy of live attenuated and inactivated influenza vaccines in schoolchildren and their unvaccinated contacts in Novgorod, Russia. J Infect Dis. 168:881–887].

It has been demonstrated that the LAIV vaccine provides protection against ‘drifted’ variants of influenza i.e. where the circulating wild type strain is different to that used in the influenza shots. In Russian clinical trials the LAIV vaccine provided 59% protection in situations in which the epidemic influenza strain was different from the vaccine strain virus. In years where the vaccine strain has not exactly matched the circulating strain of influenza, the standard inactivated flu shot has provided protection at little more than placebo rates. This is important because the yearly decisions by the WHO, on which influenza virus strain should be selected for production of seasonal vaccines, is based on an expectation of what strains will circulate. This can be extremely difficult to predict into the future. A broader protective vaccine has obvious advantages including in the case of avian influenza.

Collaborations with the Institute of Experimental Medicine, St Petersburg, the World Health Organization, the Centres of Disease Control and Prevention (CDC) and other international groups such as the Program for Appropriate Technology in Health (PATH) for the development of seasonal and pandemic influenza LAIV vaccines are in place. This includes vaccines in development for avian or bird flu, including H7N9 and many other avian flu virus types of concern.

The agreement is a non-exclusive licence designed to support wider distribution of the LAIV influenza vaccine in developing countries. Whereas public sector usage is royalty-free, royalties will flow to BioDiem directly from private sector sales. BioDiem has private sector licences in place with Serum Institute of India and also Changchun BCHT Biotechnology Co, China.

BioDiem has authorised the Institute of Experimental Medicine (IEM) and the Centers for Disease Control and Prevention (CDC) to supply LAIV reassortants to the WHO for use by its sublicencees. The vaccines developed through the WHO program are manufactured using eggs.

In 2014 the Serum Institute of India launched its seasonal influenza (trivalent) intranasal vaccine, Nasovac-S™, in the Indian market.  This followed on from SII’s  H1N1 (swine flu) pandemic vaccine, called Nasovac™, which had been launched in July 2010. These vaccines are a result of the WHO collaboration using BioDiem’s technology. BioDiem receives royalty payments on sales of these vaccines in the private market.

Facilitated by funding primarily from the WHO and PATH organisations, a new laboratory fit-out at the Institute of Experimental Medicine in Saint Petersburg has allowed the Institute to handle highly pathogenic influenza strains e.g. bird flu. Any material generated will be made available for use in developing countries under the WHO’s Global Pandemic Influenza Action Plan to Increase Vaccine Supply.

The arrangement with the WHO gives BioDiem the opportunity to realise income from royalties on sales in the private market in developing countries.

Outbreaks of influenza remain a serious concern to the global community as evidenced by the examples of H7N9 in China and occasional cases of H5N1 in other countries. Human-to-human transmission of highly pathogenic viruses is the concern, because of the potentially high mortality rate, and it is known that little change is needed in the genetic make-up of existing viruses for this possibility to eventuate. Therefore the advance preparation and testing of vaccine candidates which could be effective in such a situation is an important public health initiative.

Under an agreement with the World Health Organisation (WHO), the Institute of Experimental Medicine, St Petersburg, Russia prepares LAIV reassortant vaccine strains suitable for production of seasonal and also pandemic influenza vaccines. A range of pandemic LAIV strains based on BioDiem’s LAIV technology has  been prepared and tested in ferret and human trials so that they could be available quickly in the event of an influenza pandemic (see Table below).

LAIV vaccine candidates have already been produced in order to be prepared for various pandemic scenarios.

The candidates include subtypes of H5N1, H5N2, H7N3, H1N1,H2N2 and H7N9. Preparatory studies in ferrets (the animal model of choice for influenza) showed the candidates were safe, immunogenic and protected animals from challenge with homologous (same) and heterologous (similar) ‘flu viruses. Also clinical trials (Phase I) showed safety and immunogenicity in healthy adult volunteers. The advantages of LAIV vaccines includes stimulation of both humoral (local and serum antibody) and cellular immune responses, whereas standard inactivated flu vaccines predominantly induce serum antibodies. In the case of a pandemic, the cross-reactive immune response induced by LAIV’s would be beneficial to protect against a new pandemic, even if the pandemic strain is slightly different. In the case of a serious pandemic, such breadth of protection could be vitally important.

The Cooperative Research and Development Agreement (CRADA) between BioDiem and the US Center for Disease Control and Prevention (CDC) was aimed to develop a vaccine candidate against the H5N1 avian influenza based on BioDiem’s technology. Preclinical studies to assess the infectivity, immunogenicity and protective efficacy of the H5N1 LAIV versus the standard inactivated influenza vaccine were successfully completed. The results support the value of the LAIV vaccine technology in protection against the H5N1 virus.

It was found that the cell-based manufacturing method, which allows rapid scale up in the case of a pandemic, produced successful results. The LAIV vaccine provided greater cross-protection against variants of the H5N1 virus than an inactivated vaccine. Previous published work has demonstrated the efficacy of cell-produced LAIV vaccine vs. egg-produced vaccine in ferret studies.